A post-apocalyptic hunter-gatherer game most likely has people thinking of The Walking Dead or some such similar show or game on today’s market. But Horizon: Zero Dawn

steps above and beyond the common expectation for such a theme. It shows incredible uniqueness, spectacular scenery and keeps the player constantly moving in their quest for the truth. 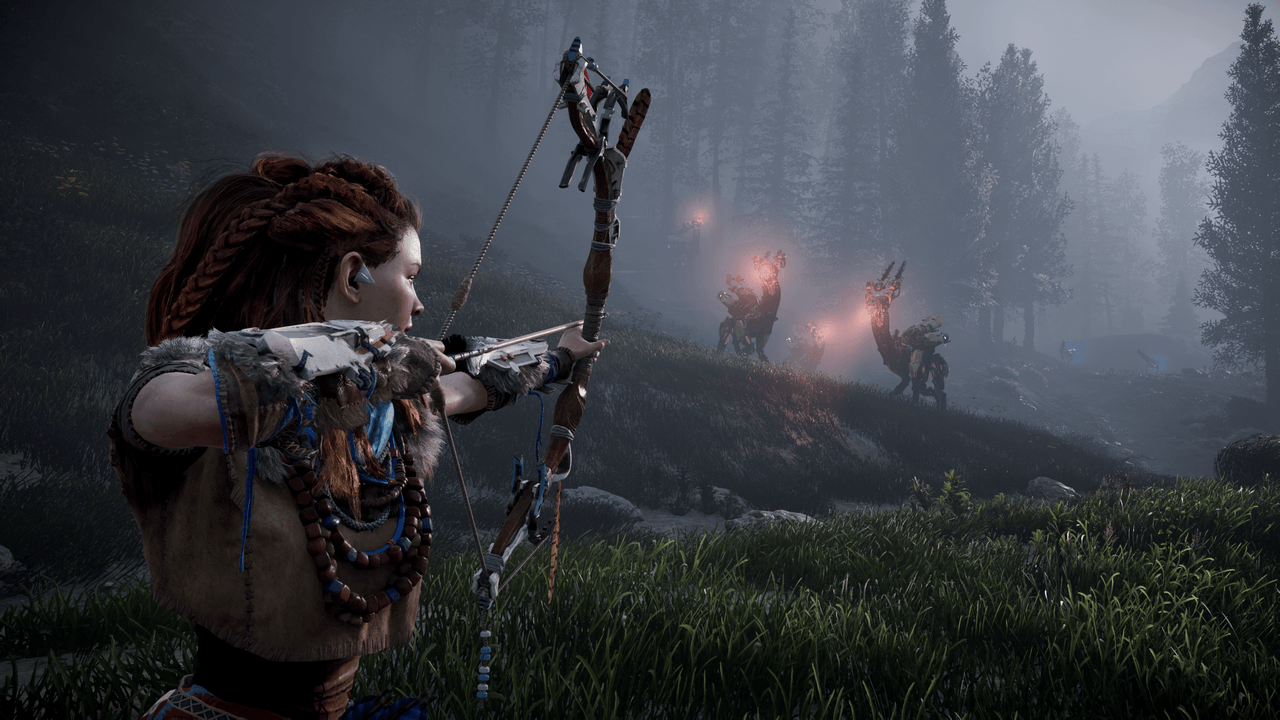 The game follows Aloy, a female hunter/archer who must navigate a post-apocalyptic world overrun by monster robots. She leaves her protected nest of an area, where she is raised and trained to hunt and survive by a man named Rost, in order to explore the world she has been protected from. She is on a mission to discover what really happened to the grand civilisation lost to an unpredictable enemy. The coming-of-age style tale enters the familiar and somewhat eery territory of human ambition leading to the impending annihilation of the human race. Advanced robots, barely-surviving humans and a throwback to the origins of how pre-industrial homo sapiens once lived, seem like all too familiar concepts. We see variants of this premise all over our games, TV shows and movies on an all too regular basis. However, even though the hunter/gatherer in a post apocalypse land may seem like a predictable story-line, Horizon: Zero Dawn manages to maintain a sense of familiarity, while also offering novelty, excitement and a feeling of the unknown. Throughout the game, the player is shrouded in its mystery, begging for answers. How does this world exist, and what led it here? 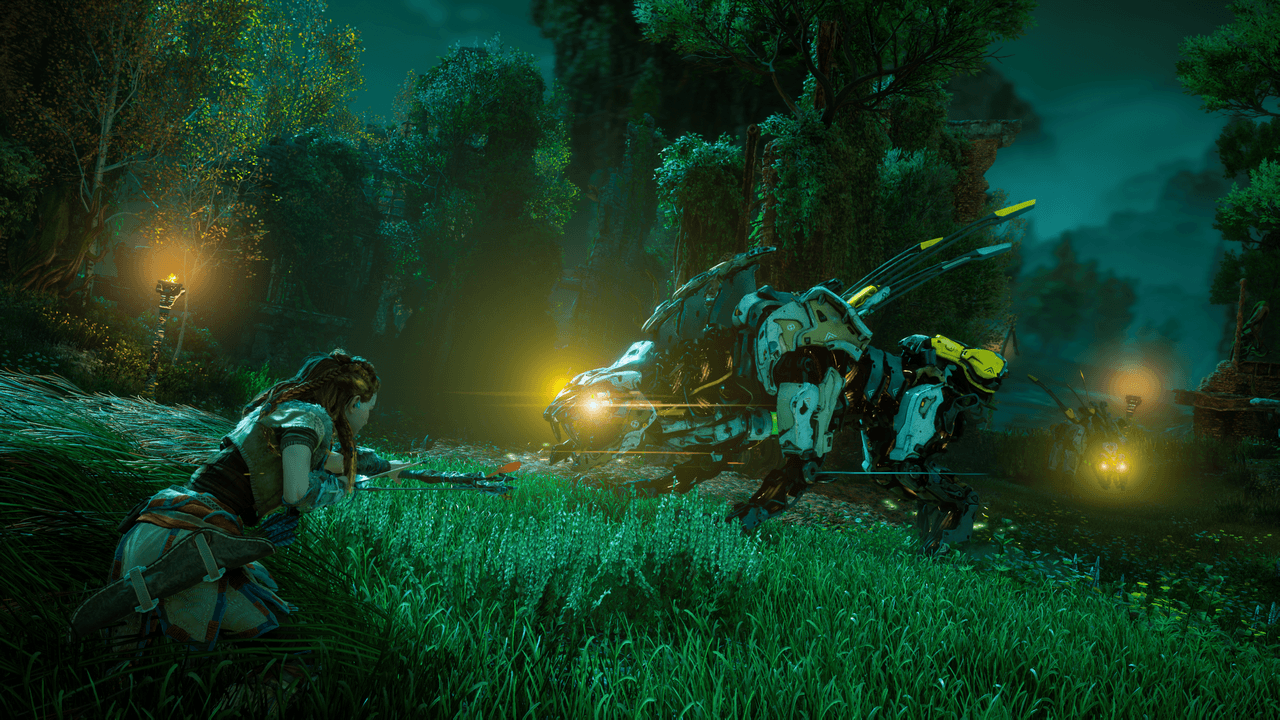 The game-play itself sometimes involves some less exciting elements, such as traipsing across endless terrain in search of the unknown. It also involves a significant amount of foraging for materials to create weapons and potions for use along to way against the twenty-five or more different types of machine enemies. On top of that, we often find ourselves hiding in tall grass, crafting and plotting traps to snare the robots. but this recurring theme, although not riveting, tends not to overwhelm or bore. Despite the repetition, it all fits perfectly into the mould of the game’s overall intent: to survive. And this slower-moving game-play fits well into the actual fighting, as you use your focus scan to set traps, launch your offensive and fight some truly haunting mechanical beasts. Coming across new, fascinating variants of the creatures along the way, leaves you constantly surprised, thinking on your feet and excited to explore new ways to defeat them.

But I have to say, aside from the gameplay, one of the greatest elements of the game for me, is the world itself. Created by Guerrilla Games, the abandoned ruins, wildly ambitious terrain and vast landscapes are a visually stunning performance in itself. Aloy often finds herself standing atop a peak, overlooking mountains or climbing trees that offer brilliant views of waterfalls. And I often found myself wanting to stand there to watch the sun set over these breathtaking scenes. 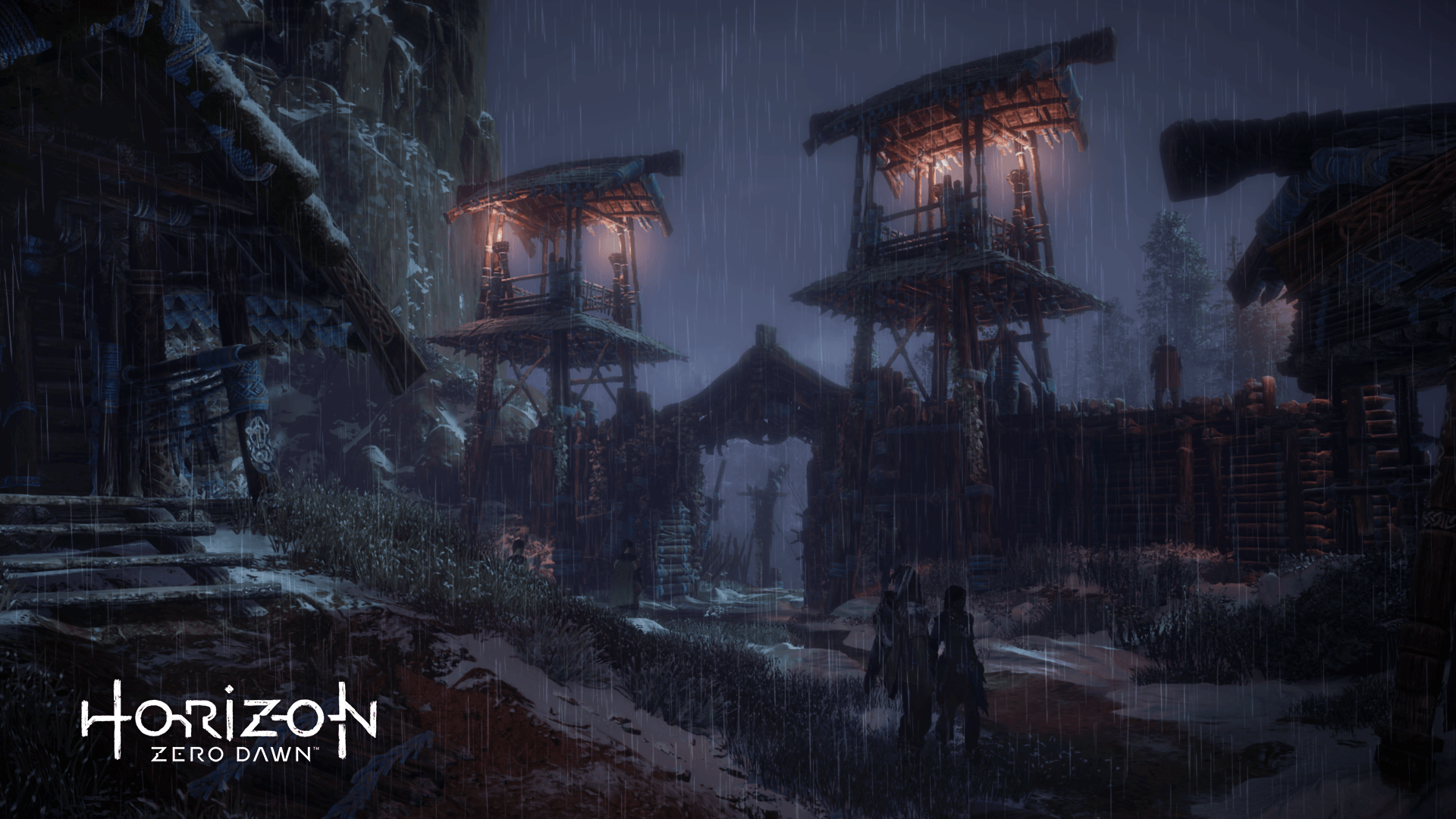 Overall, the game is one of highs and lows. Aside from Aloy, the characters she comes across are largely unforgettable and the game can become monotonous as the player moves slowly through the landscape around her. However, the world is a visual masterpiece, and the gameplay is overall an exciting and unpredictable mess of fun. Horizon: Zero Dawn keeps you constantly thinking on your feet, pushing your limits with the extra hunter trials available and leaves you permanently curious with the mystery and expectation of it all. It keeps you guessing and pushes you to continue playing to the end. There is no stilt or stalling for Horizon: Zero Dawn. It moves with grace, arcing a unique and thoroughly unexpected storyline. It is a great game with a lot to offer the casual gamer and avid gamers alike. Definitely get this game. 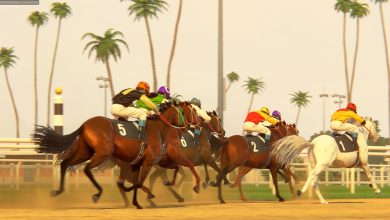 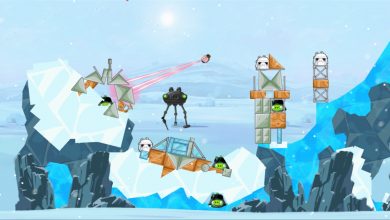