The wait is over. The next-gen console has arrived and we’re already seeing improvements from the PS4.

With a fresh look, higher resolutions, less lagging and way more storage, the PS5 is far superior to the PS4 in more ways than one. The next-gen console is something completely different which is both exciting and concerning. The PS4 was a great console with a short list of improvements needed, so the rumored modifications have some slightly apprehensive. Why fix something that isn’t broken?

So, if you haven’t managed to get your hands on a PS5 for yourself and are wondering how it differs from the PS4, we’ve summarized how PlayStation improved the already pretty-good console. 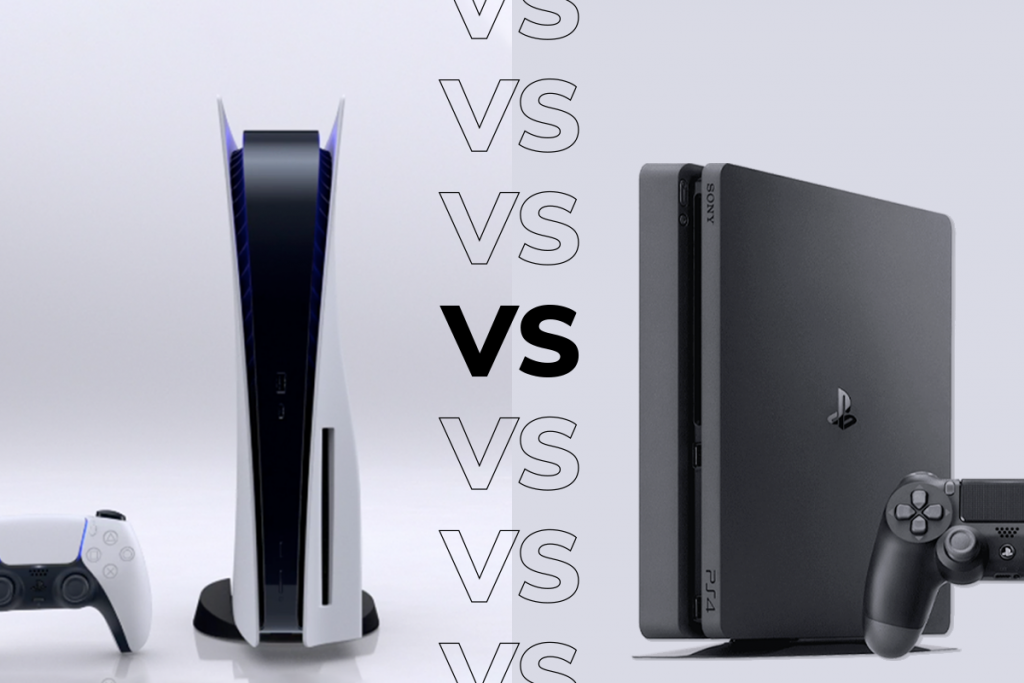 There’s no doubt that the PS5 has far more superior specs than the PS4 and PS4 Pro. Sony have really upped their game and improved almost every aspect of the console. With efficient storage, higher resolutions and faster, larger processors, we’re super keen to give it a whirl and explore what else it has to offer. Here’s a summery of how it compares to the PS4;

The PS5 has double the amount of memory at an impressive 16GB GDDR6 with an internal storage as big as 825GB SSD, far superior to the PS4’s 500GB, 1TB HDD. The optical drive shows off an Ultra HD Blu-ray system with a significant improvement on the video output, pushing the PS5 to 4K instead of the PS4’s 1080p.

Comparing the specs can be a bit unfair. It is like comparing apples to pears, they’re two different consoles with different architectural designs. The PS4 Pro and Ps5 may have the same number of compute units but the PS5 has CUs with a much better transistor density, making it far better than the PS4.

Another way the PS5 specs beat the previous generation is via the Wifi speed. The all-new PS5 uses the WiFi standard 6 which can hit speeds of 9.6 Gbps, this is over fifteen times faster than the previous generation’s standard 4. To make the most out of the PS5’s new lightning speed connection, compare fibre optic broadband deals.

The PS5 is approximately eight times more powerful than the PS4 when looking at their respective Teraflops. This combined with the PS5’s 36 CUs and higher clock speed makes the console extremely efficient and incredibly fast.

In summary, the PS5 wins hands down when it comes to graphical capabilities. The PS5’s GPU will have more cores that will be faster, more efficient and definitely more powerful.

With improved graphic capabilities, we’re expecting the console to push games to the highest resolutions ever seen. The HDMI 2.1 on the PS5 supports 4K at 120Hz and 8K, quite different to the PS4 which struggles when outputting 1080p due to high power-consumption.

A price increase is a given when such major improvements have been made to the console. The introduction of the SSD, better specs and an overall faster processor means that the PS5 will be more expensive than its older sibling the PS4. The PS4 Pro costs about the same as the digital version of the PS5 and the Standard Edition will cost almost 30% more than that. The PS5 is reverse compatible making it a great value for money as you’ll be able to play all your PS4 games and the latest games all on one brilliant console. Why not grab this new and improved console that will do everything your PS4 does and more.

There’s no argument when discussing how brilliant the games are that are available for the PS4. With a fantastic and long list of exclusive games such as God of War, Unchartered 4 until Dawn and many more, it will be hard to beat. Then the PS5 comes out and we find out that it is backwards compatible, bonus!

Another great reason to splurge and buy the PS5 is to try out all of the ground-breaking games that have and will be released for the console. Marvel’s Spider-Man: Miles Morales is a major standout accompanied by Demon’s Souls, Godfall and Sackboy: A Big Adventure. The best part is that the list is much longer with some major sequels of some of your favourites expected in the near future.

The DualSense is possibly one of the most exciting things. A new ‘toy’ that will enhance gameplay and create an unforgettable experience for all players. Sony have dropped the DualShock controller entirely and have replaced it with efficiency, better battery life, haptic feedback and adaptive triggers. The DualSense controller will create a more immersive experience and will act according to your weapon of choice. For example, when firing a AK47 you’ll feel a major difference from when firing a shotgun.

After all that, it’s difficult to ignore the fact that the PS5 is clearly the more superior console with far more variety and overall a more immersive and enjoyable experience for players when tucking into one of the various games it has to offer.

How Else Could the PSN Be Enhanced to Improve Players' Experiences?