It seems that in recent years an increasing number of new videogames have been falling into one of two categories: high-profile, high-budget, “AAA” blockbusters; or smaller-scale, low-budget, “indie” titles. But what about the middle-ground? What about those games which don’t necessarily belong in either category and instead fall somewhere in between? These “Stuck In The Middle With” features are dedicated to looking at some games which, whatever their final level of quality, could be described as mid-tier releases. 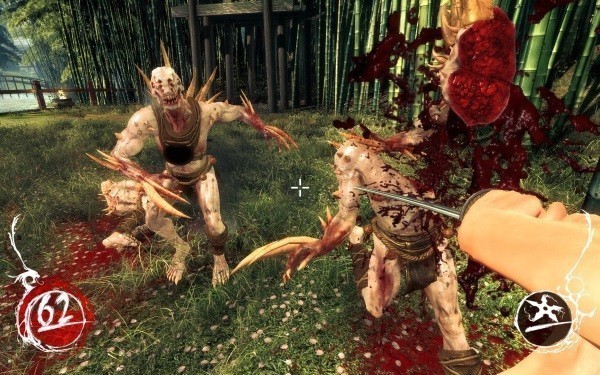 How many wang puns can be crammed into one videogame? Well, with 2013’s Shadow Warrior, developer Flying Wild Hog and publisher Devolver Digital did their best to find out, God bless them.

A remake of the 3D Realms-developed 1997 original, Shadow Warrior is an action-packed first-person shooter which combines a present-day Japan setting with fantastical mythological elements, the mash-up of which sees you mowing down hordes of demons (and occasionally human enemies) throughout the game’s numerous environments.

You play as Lo Wang, an assassin and general problem-solver (and source of said wang puns) working for a powerful Japanese businessman, your task at the beginning of the game being to retrieve an ancient katana named the Nobitsura Kage. Unsurprisingly, things rapidly go south, and before you know it you’ve bonded with an amnesiac demon named Hoji who informs you that the Nobitsura Kage is actually three swords. And so your mission becomes the retrieval of these scattered swords, although standing between you and them are a vast number of hostile demons. 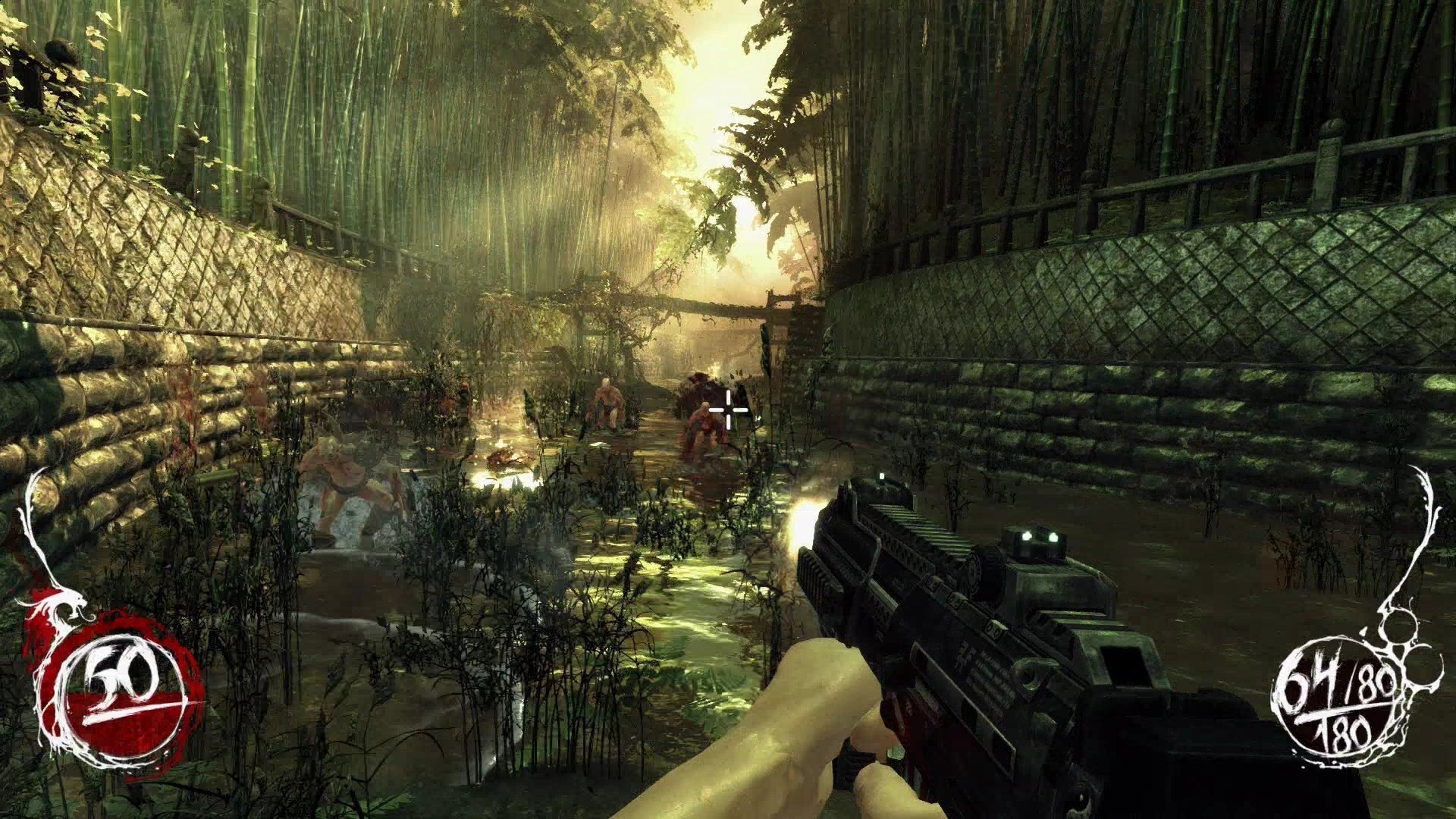 Cue copious amounts of shooting, blasting, burning, slashing, and generally being showered in the blood, heads, limbs, and organs of those demons foolish enough to get in your way, the game providing you with an expanding selection of weapons to choose from as you progress, including a handgun, submachine gun, rocket launcher, crossbow, severed demon head, and more. There’s also further depth to the weapon system: some weapons can be dual-wielded, secondary fire modes offer alternate options, and weapons can be upgraded with money found throughout the game-world.

For those who like their demon-maiming up-close-and-personal, Wang is armed with a katana capable of separating enemies into multiple pieces. The katana can be swung in different directions and a number of special moves can be unlocked for it, making it even more lethal. Although the katana can sometimes be a little imprecise when you’re trying to slash in a specific direction, it’s always fun to use.

In fact, the combat as a whole feels great, which is obviously vital when it’s the driving force of the game, as is the case in Shadow Warrior. The game usually throws enemies at you in large numbers in spacious, arena-like areas, and the action can be very fast and frantic as you stay on the move, blasting and slashing away while avoiding incoming attacks, switching between weapons depending on your ammunition situation – something which becomes increasingly important in later battles and which helps to keep the combat fresh by encouraging you to experiment with your arsenal.

Another way in which the game provides this encouragement is by scoring your performance at the end of each battle and rewarding you with a commensurate amount of karma points, as mixing up your play-style and killing enemies in different ways helps to improve your score, and in turn your earned karma points can then be spent on various character upgrades.

Although there isn’t a huge amount of enemy types considering the sheer number of foes you’ll face during the game, the available types do their part in keeping the combat interesting, with some focusing on melee while others attack from range, some enemies fly while others carry large shields, and some can transform into faster, more aggressive versions of themselves.

Shadow Warrior shines in areas besides combat, with one of these being the level design. Although the game’s structure is linear, the levels themselves are often pretty large and contain plenty of secrets to encourage exploration. The levels also look great, the game placing you in a range of environments including a beautiful property of ponds, cherry blossom trees and traditional Japanese architecture, with what appears to be Mount Fuji in the distance; a town besieged by demons; a shadowy bamboo forest; and a mountain fortress. Also, a few levels add further variety by taking place not on Earth but in the demonic world of the Shadow Realm. 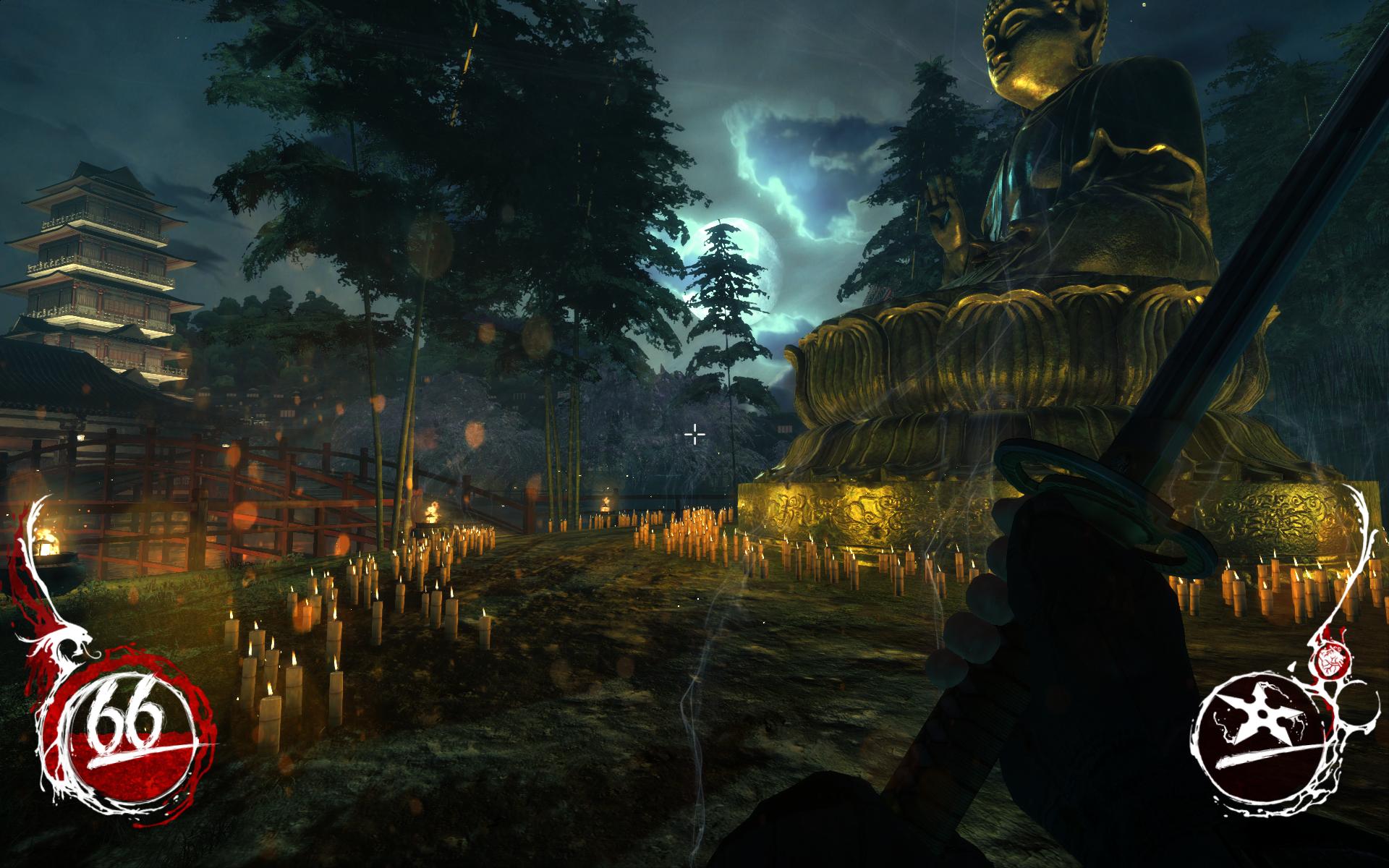 Another strength is the game’s writing, as it’s not all just wang puns, although there are more of these than you can shake a wang-shaped stick at. Wang himself is a fun character, confident and dangerous but a geek at heart – an avid comic book collector, he has a “Wangcave” beneath his house, and a scene early in the game sees him driving while enthusiastically singing along to Stan Bush’s “The Touch”, a song which will be intimately familiar to fans of The Transformers: The Movie (the 1986 animated film, not those Michael Bay live-action abominations).

Wang has plenty of amusing and snappy dialogue, with the banter between him and Hoji often being a highlight, the relationship between the two characters acting as one of the backbones of the narrative, while other moments of humour include the fortune cookies which can be found in the levels, each one containing its own nugget of wisdom. For example: “Having sex is like playing bridge. If you don’t have a good partner, you’d better have a great hand.” 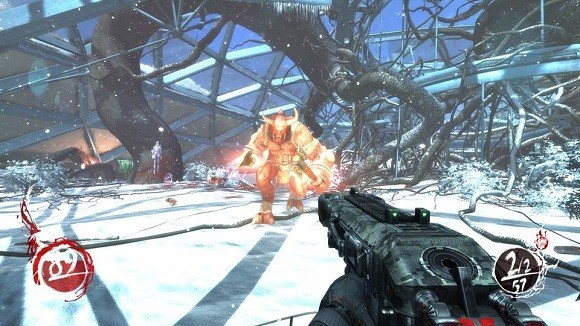 As well as clearly not taking itself too seriously (my fight with an aggressive, burning, demonic rabbit – during which a fast-paced metal track played – is saved for posterity as a video clip on my PlayStation 4), Shadow Warrior also references the original game in several ways. There are Shadow Warrior arcade machines found in some levels, looping footage and voice clips of the 1997 title, and some secret areas are presented in that game’s graphical style, a fact on which Wang comments at one point.

Also, the core gameplay itself leans towards the 1997 original and other first-person shooters of its era, what with its almost constant action, focus on movement and aggressiveness over taking cover, and implementation of health packs (although Wang does have a special move which partially recharges his health). This reboot manages to pay homage to its roots while boasting some modern sensibilities, and the combination works really well.

Shadow Warrior has a few flaws, such as how the various upgrade systems, while useful and enjoyable to a degree, are unnecessarily sprawling; along with the fact that the specific control combinations required to pull off some special moves sometimes feel imprecise and unreliable, which can obviously be a problem when you’re fighting for your life against a horde of demons. Also, the handful of boss fights, while being decent set-pieces, drag on too long simply due to the bosses having so much health. 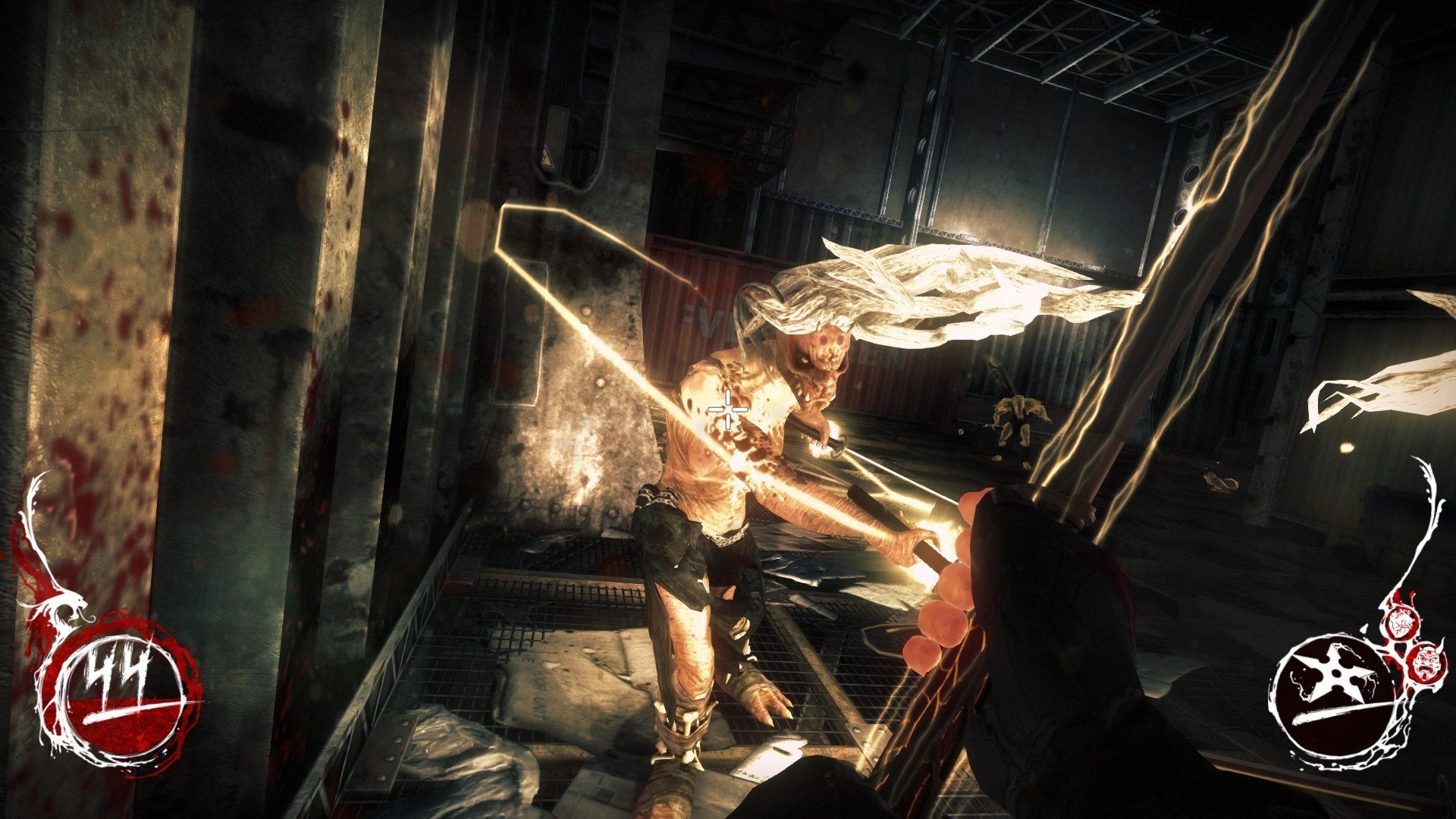 But ultimately Shadow Warrior’s strengths far outweigh its weaknesses, with other qualities of note being its decent level of challenge (depending on which difficulty level you choose, of course), its surprising length (insert your own wang pun here) for such an action-focused game, and the backstory of Hoji and his fellow Ancients, which manages to be both grand-scale and personal simultaneously.

Shadow Warrior is a confident, enjoyable and amusing first-person shooter, one filled with fast-paced, exciting action and plenty more besides. And with a sequel currently in development, there’s no better time for you to dive in and get a taste of Wang.