It’s a conundrum that faces many PS4 owners; should I sit my PS4 down, or stand it upright? As with any decision, there are pros and cons that come with either option, but it ultimately comes down to which you prefer. For example, some might find it easier to store the PS4 flat based on the environment surrounding the console. Others prefer the striking appearance of having their console stand as a tower. If you decide to pick the standing option, here we provide you with some great options. Let’s begin.

Developed specifically for the PS4 by Sony, this official PS4 stand is simple and serves the purpose many desire. Made from plastic, the design matches the sharp aesthetics of the console making this one of the better looking options. Simply lock your PS4 into the stand and your PS4 will safely position vertically. You can also get the stand in glacier white for those who own the alternative coloured console. 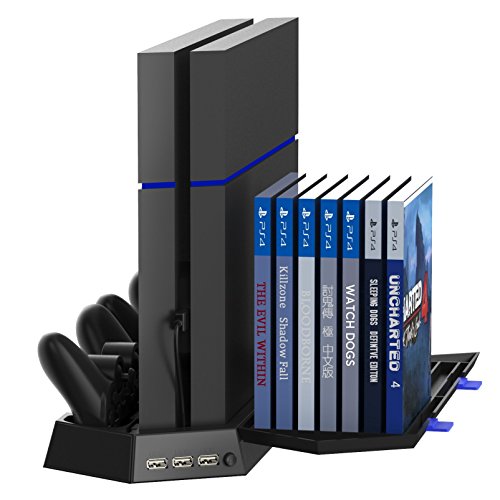 Organising your accessories isn’t always easy, but that’s what the Amir PS4 stand achieves. Ultimately, it’s more than just a stand, allowing you to house your favourite PS4 games, 18 in total, whilst also having the ability to sit and charge two controllers. Having an extra three USB ports to play with is also an added bonus. What’s more, the cooling fan will help to ensure that your PS4 doesn’t overheat. Looking for a space saver for your room? Certainly consider getting this stand if you want an overall solution. 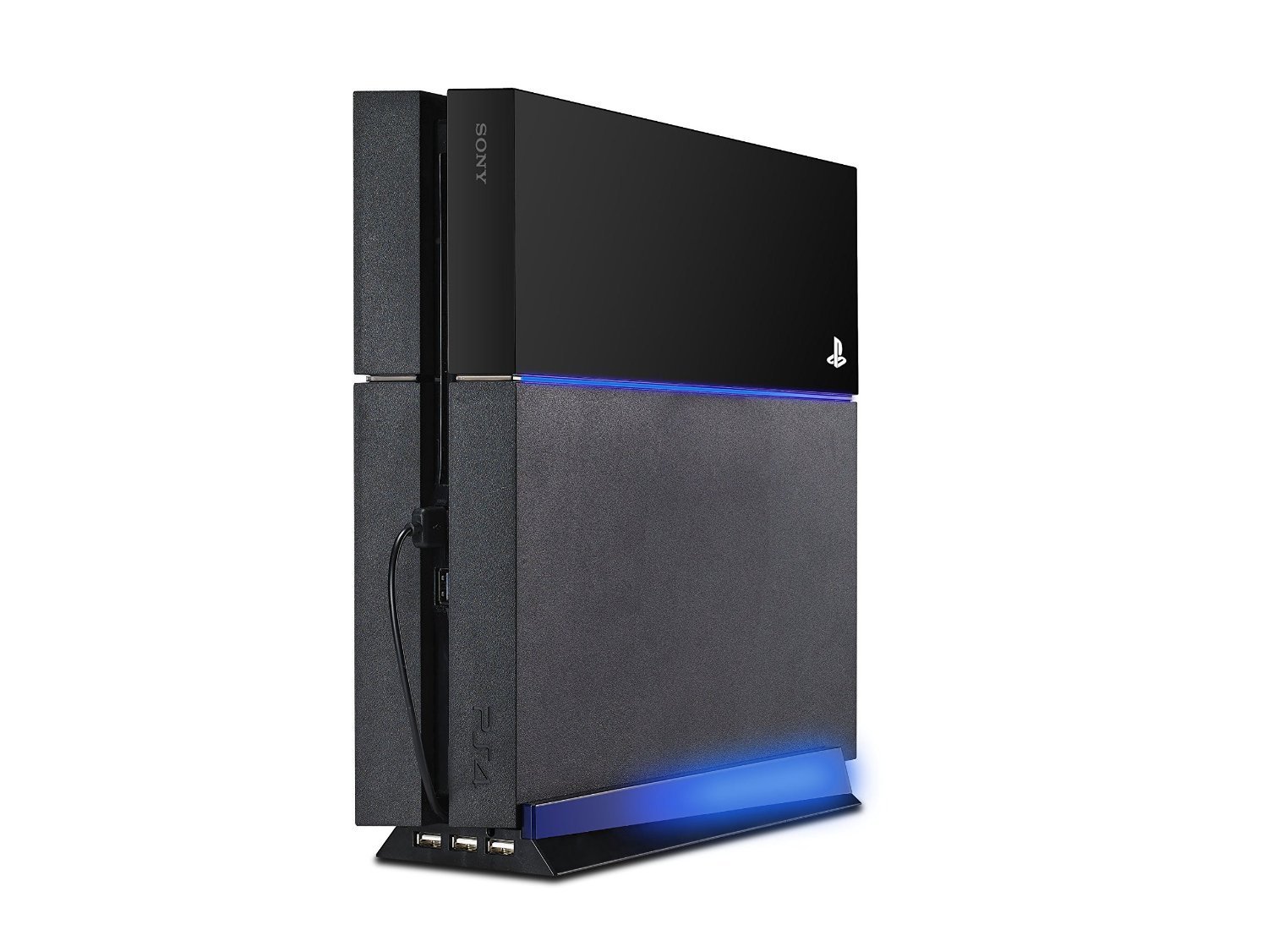 Those wanting to add a little spice to their room should definitely consider this option; the blue LED light adds an additional splash of style at night time. As you’re probably aware, the PS4 itself has a blue themed light bar, so it combines very well with this stand. It looks smart and is shaped to help prevent the console from overturning, the rubberised feet keep the stand secure. An additional attraction with this stand however, is the 3-port hub, which is located at the front allowing you to recharge and connect a variety of extra accessories. 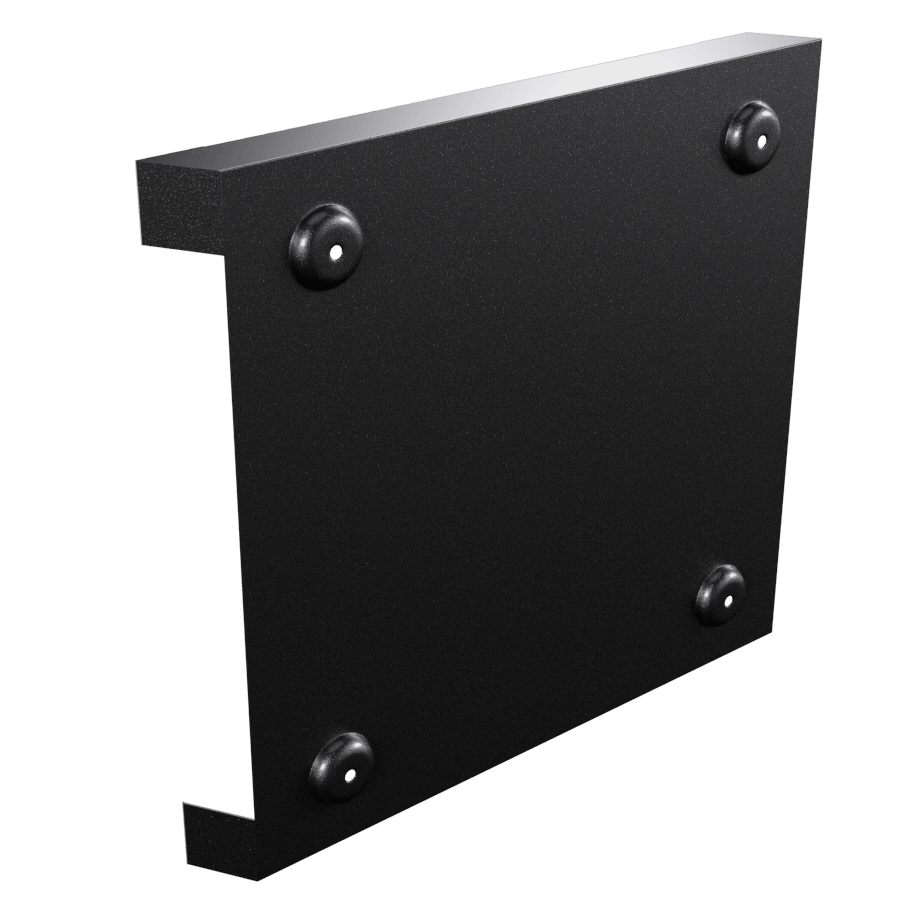 Here we look an alternative option that actually stands your PS4 against the wall. Are you a tidying freak? If so, this could be an interesting option. What’s more, you can place the console at any reachable height, meaning that it could be positioned away from children’s reach. The PlayStation 4 is a stunning piece of kit, so why not showcase it in your room also allowing you more desk and table space? This is also a very affordable option for you to consider. 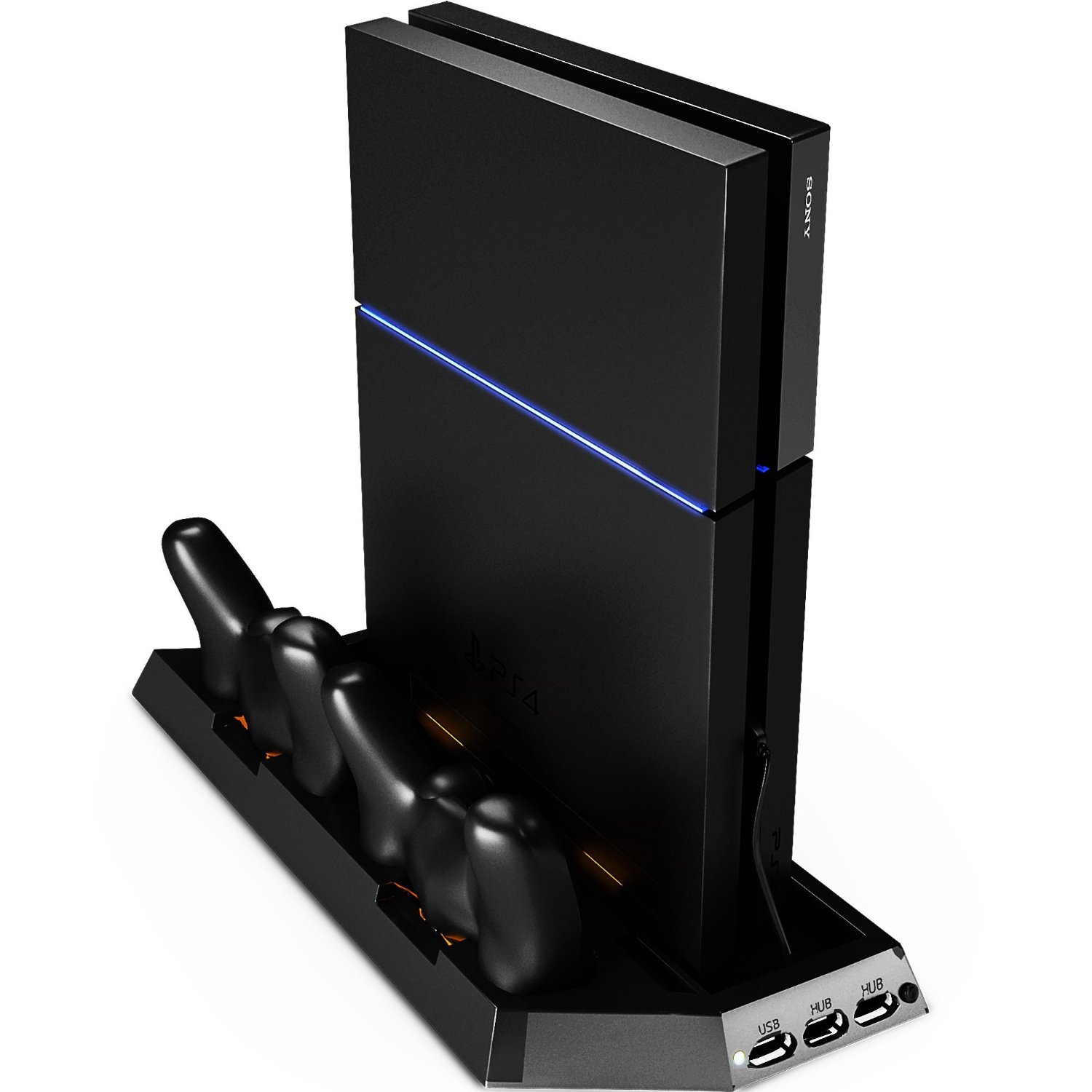 Hosting a quad chagrining station, if you have more than two controllers, then this is probably the stand for you. Also included is the cooler, which promises to prevent your console from overheating. Located at the front, four USB ports ensure you’ll never need a port extension, allowing you to change many accessories all at once. The striking appearance box makes this the best stand on this list, at least in our opinion (although this will depend on your specific scenario). I should note that you’re able to remove a charging station if desired, as shown with the picture, allowing you to just host two controllers.

It seems fair to say that a PS4 stand is an affordable accessory to add to your arsenal, yet they can transform how you store your console, games and controllers – providing you with an entertainment center and more space. Which way have you decided to store your PS4? Be sure to leave your comments within the box further down this guide.