Years ago, you couldn’t move without tripping over a videogame in which Nazis were the antagonists: series such as Medal of Honor, Brothers In Arms, Call of Duty and more saw you mowing down hordes of them. But times and trends change, and although videogame Nazis have had it comparatively easy for a while, U.S. special forces operative William “B.J.” Blazkowicz – star of every game in the Wolfenstein series since 1992’s Wolfenstein 3D – makes a triumphant return in Wolfenstein: The New Order to give them hell once more. 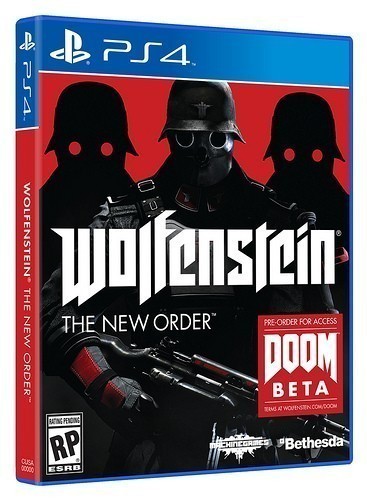 This time there’s a twist, however, as although the opening mission of The New Order is set in 1946, the rest of the game takes place in 1960, with B.J. waking from a fourteen-year-long vegetative state to discover that Germany won World War II and have since conquered the world. They achieved this via unnaturally advanced technology which allowed them to create giant robotic hounds, hulking armoured soldiers, towering weapons of destruction, and more. As such, B.J. finds himself facing greater odds than ever before as he and a small crew of fellow resistance fighters take on the Nazi menace. 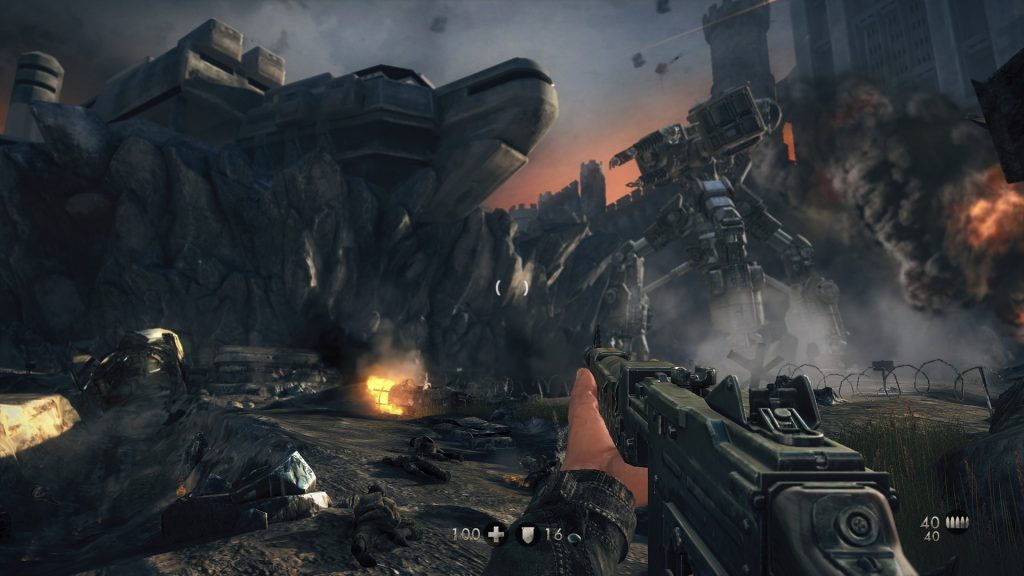 Developed by MachineGames and published by Bethesda Softworks, The New Order is a first-person shooter, and the gunplay which makes up the core gameplay is extremely polished and satisfying. There’s a decent selection of weaponry to choose from, and further depth is added via the inclusion of an upgrade system which encourages you to try out different weapons and tactics in order to unlock permanent character bonuses.

There’s also a cover system, and although using it is far from essential, that doesn’t mean an all-guns-blazing approach is always the best option, as you can die quite quickly from enemy gunfire, which adds tension and challenge. Also, while regenerating health does feature, your health only regenerates partially, requiring you to make use of medical kits strewn around the levels, once again adding a degree of difficulty missing from so many other modern shooters.

In some areas a full-on stealth approach is not only possible but encouraged, as silently eliminating enemy commanders can prevent them calling for reinforcements. Those craving action shouldn’t worry, however, as stealth is totally optional and is far outweighed by fire-fights – there are plenty of opportunities to dual-wield a pair of powerful guns and blaze away at any Nazi scum in sight. 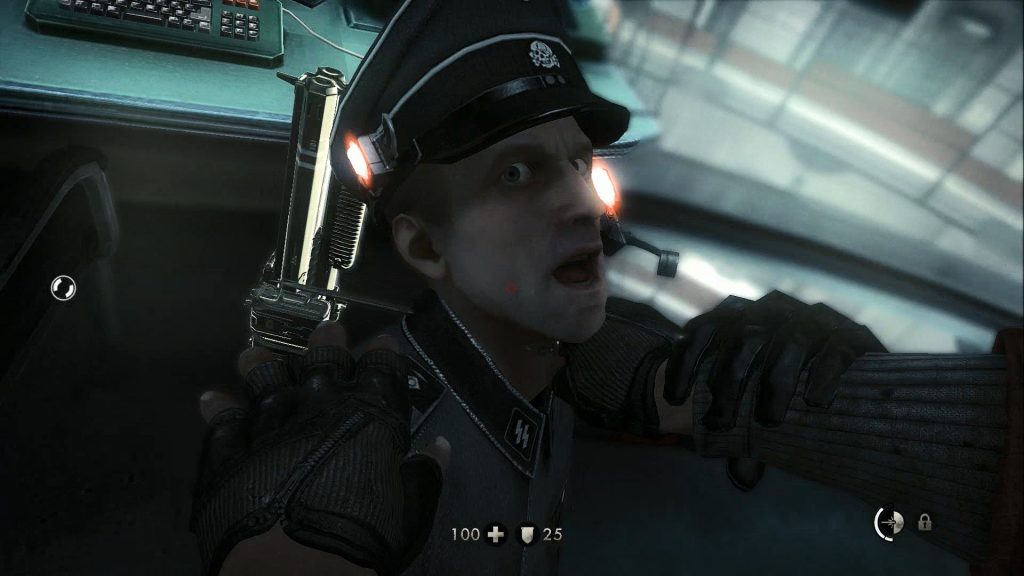 While levels are generally linear, the game’s level design often shines thanks to alternate or hidden paths which open up options in terms of how you want to tackle a particular area. Exploring off the beaten path can also reward you with collectibles, some unlocking information on people and places, and some unlocking new gameplay modes (if you can crack the associated code). And for those who might prefer shooting Nazis made of pixels rather than polygons, one particularly cool Easter egg allows you to play a level from Wolfenstein 3D.

A few levels mix up the gameplay with the inclusion of controllable vehicles such as a heavily armed Nazi robot, and a submersible which you pilot through flooded sewers beneath Berlin. You’re also able to swim in some areas. These moments are enjoyable, adding some variety without outstaying their welcome. There are also a few brief levels which take place at the headquarters of the resistance, offering some downtime and allowing you to get to know some of the supporting characters a little better.

B.J.’s mission, which is presented across a number of consecutive chapters, takes him from Berlin to London to… well, I don’t want to spoil anything, so let’s just say he travels to much more distant locations as well, and all of these are brought to life by the id Tech 5 engine, which makes for some fantastic visuals. The music also really helps the atmosphere, whether it’s the heavy and oppressive (in a good way) title theme or the rousing piece that plays at the resistance headquarters at one point. 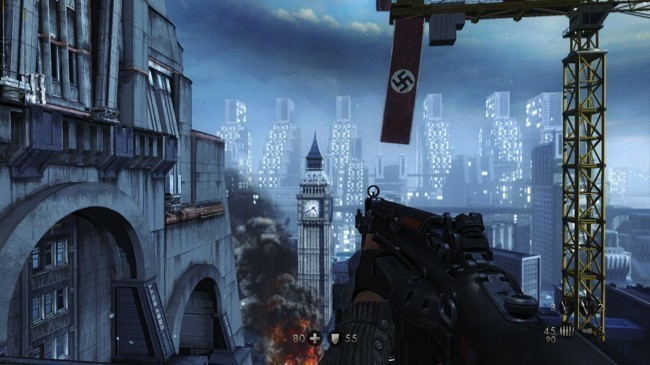 The voice acting is excellent, particularly the performances by Brian Bloom, who plays B.J., and Gideon Emery, who plays foul-mouthed Scottish pilot Fergus. In fact, I found B.J. to be a surprisingly interesting and enjoyable character, and Bloom certainly contributed to this, whether delivering deadpan one-liners or more thoughtful internal narration. MachineGames manage to present two sides to B.J. – one side being an utterly focused, Nazi-killing murder-machine, the other a loyal and caring man who wants peace more than anything else – without this duality ever seeming jarring or inconsistent.

A character-related feature worthy of note is a choice presented to the player in the opening mission, as your decision here will affect the rest of the story to a degree, with certain characters and scenes differing between the two separate timelines. It’s an interesting inclusion which adds some incentive to replay the game.

Another nice, immersive touch is how many of the German characters – enemy combatants or otherwise – actually speak German, their dialogue being translated in optional English subtitles. And thankfully, MachineGames don’t fall into the trap of painting every German character as a supporter of the Nazi regime: while the story features despicable Nazi antagonists such as General Wilhelm “Deathshead” Strasse and Frau Engel, alongside them are several German resistance fighters, and one of the game’s collectable letters is written by a German priest living in Peru, who writes of Nazi-sanctioned butchery committed there and how sickened he is by it. 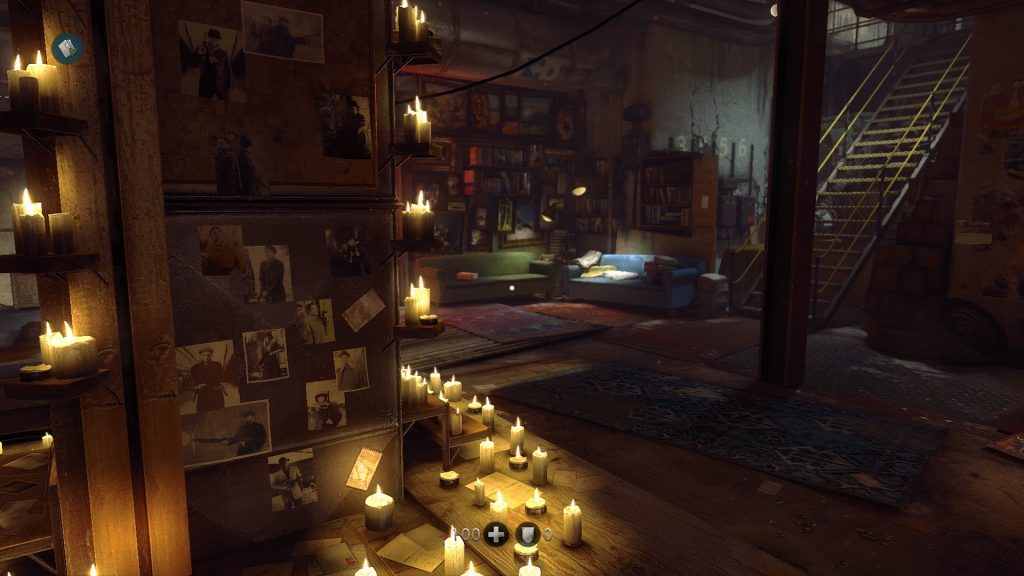 As impressed as I am by all of the positive elements of The New Order, one particular thing which really stood out to me is how it manages to strike this incredible balance between being a bombastic, over-the-top, sci-fi shooter and being genuinely respectful of World War II. You’d think these two things might be incompatible or at least jarring when placed alongside each other, but that’s never the case in The New Order, as the game is never crass, mean-spirited or gratuitous, it never makes light of the human suffering which is obviously so inextricably linked to that terrible global conflict. MachineGames deserve a huge amount of praise for deftly walking such a fine line.

I’d like to mention a couple of final points which only enhance my appreciation for the game: firstly, the fact that, unlike many modern games, a half-baked online multiplayer mode wasn’t forced in. Instead, the focus was on making the single-player experience as good as it could be, and I wish more developers and publishers would follow this example.

And secondly, the experience hasn’t been cut up or hobbled in any way via downloadable content: no season pass, no microtransactions, no “real ending” removed and sold separately, no perks or items, no weapon skins, etc. It’s a fucking sad state of affairs when I have to point this out as noteworthy, but there we go. The closest thing The New Order has to such content is its prequel expansion The Old Blood, although this is different in that it’s additional content done right: a reasonably priced expansion which offers its own full experience. 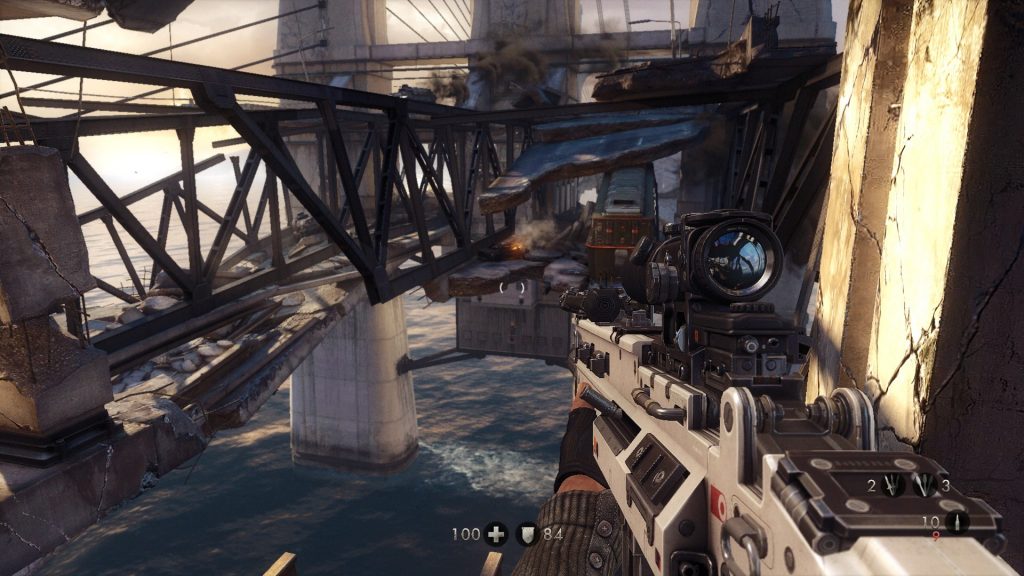 Wolfenstein: The New Order is a fantastic game, MachineGames having paid homage to the series’ past while simultaneously expanding upon and updating it in a number of ways, granting it a rejuvenated sense of identity. And if the developers can continue to strike the incredible balance that they achieved with The New Order in future titles then I can’t help but hope that, although he may deserve peace, B.J.’s war against the Third Reich continues for a long time to come.