E3 was a veritable hive of activity this year, which saw an impressive 68,400 attendees exploring the three-day event. The Los Angeles crowd of game enthusiasts lingered long over Ubisoft’s new pirate themed game, Skull & Bones, which promises to introduce a smooth and seamless multiplayer angle to what has principally been thus far a single player experience. 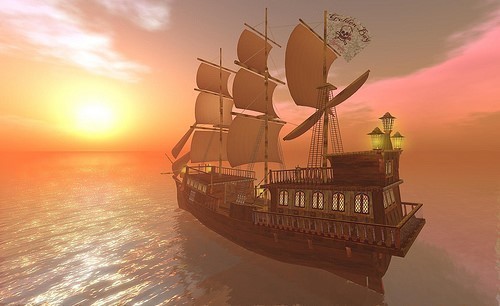 The game follows in a long and rakishly honourable line of video game titles that have slapped a patch across one eye, screwed on a peg leg and buckled their swash in search of a hidden pirate cache. Perhaps the pirate mythos is peculiarly attractive to the game developer’s mindset – they are often regarded as outliers, rogue agents tilting against the windmills of conformity, free-wheeling buccaneers bending the rules and slipping through the gaps, roaming the high seas of the internet etc. One can stretch a tortured metaphor too far, but the fact remains that pirate games are as popular today as ever they have been.

Turn your spyglass toward an iGaming site and you’ll soon strike upon games beyond number along the lines of mFortune’s Pirates Treasure, a game where players can win money by uncovering buried treasure. The five-reel, nine-paylines title features iconography associated with pirates in popular culture, such as the skull and crossbones and eye-patched Buccaneer, along with a treasure chest mini-game. Often these cheery pick-up-and-play games lift their inspiration from the blockbusting Pirates of the Caribbean movie franchise, and that’s kind of the point. Everyone loves a good pirate romp.

Although few titles have managed to lock down the experience of playing a pirate quite to the degree that we would wish (take a shambolic bow, Risen), it must be said that a significant number of developers have taken a crack at the genre over the course of gaming history. Two of the earliest efforts still rank among the best attempts yet at developing a fully fledged pirate game.

Sid Meier’s Pirates! (MicroProse, 1987) was one of the first game titles to really explore the joyous potential of a pirate simulation, with an emphasis on roaming the oceans, ship-to-ship combat, plundering defeated vessels and engaging in fierce cutlass battles with rival brigands (a confused blur of button-mashing that begins as a pleasure yet soon becomes a chore). A peculiar, but historically faithful, Trade Wind tidal mechanic ultimately dogged the early game’s ambitious open world set up, forcing players to sail frustratingly long distances across the game map to achieve their objectives, but nevertheless the game did a good job of injecting a spirit of mischief into the genre and is fondly remembered today.

Originally released for the Commodore 64, Pirates! was quickly ported to other operating systems of that era, and a graphically updated version of the PC game helped cement Sid Meier’s formidable reputation as a games pioneer. 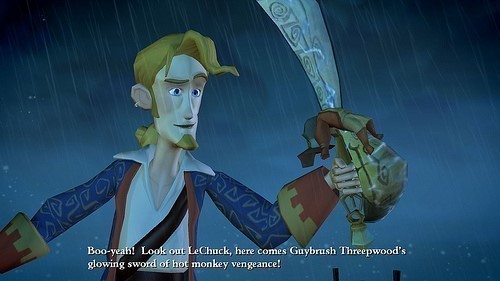 “tales of monkey island guybrush threepwo” (CC BY 2.0) by michael.aulia

The second proud parent of the modern pirate game would simply have to be Amiga classic Monkey Island, the acclaimed adventure game series by LucasArts. The first of these titles, The Secret of Monkey Island (1990) became one of the defining games of its time, and is noted for its anarchic good humour and endlessly inventive story. The Pythonesque tale of cabin boy-turned-reluctant-pirate Guybrush Threepwood is packed with deadpan one-liners and surprisingly fiendish challenges. At one point a boisterous exchange of pirate insults becomes an amusing and memorable mini-game; a standout moment in a game suffused with a warm glow of quirky mischief. Four further games would follow in a similar vein on multiple platforms, culminating in the episodic Tales of Monkey Island at the end of 2009.

Time will tell how Skull & Bones stacks up against its noble predecessors, but the idea of crewing a virtual pirate ship and engaging tactically with rival crews composed of real players evokes a toothy grin of impending delight in most people; we’re all Buccaneers at heart. 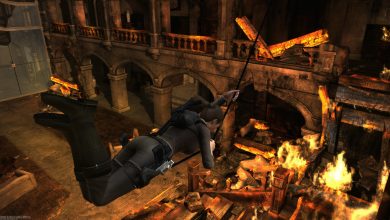