Over the years, I’ve played and really enjoyed the majority of games in the Grand Theft Auto series, but even so, with the release of Rockstar’s Grand Theft Auto V, I had no intention of picking up the latest title on day-one, partly due to an existing backlog of games and partly due to the fact that I very rarely buy a game on its day of release. And as time passed, it seemed like I’d made the right decision as my view of the game became increasingly negative: the online mode was littered with technical problems early in its life, you could buy in-game money with real-world money, and it was only a little more than a year before the original version of the game on PlayStation 3 and Xbox 360 was superseded by an improved rerelease on PlayStation 4 and Xbox One.

When I bought a PlayStation 4 last Christmas, I ended up with the GTAV bundle simply because it was the best deal I could find on the console, I still had little interest in the game. But then I actually played GTAV, and to my surprise, it bowled me over like an in-game pedestrian hit by a Banshee going at 120 miles per hour. 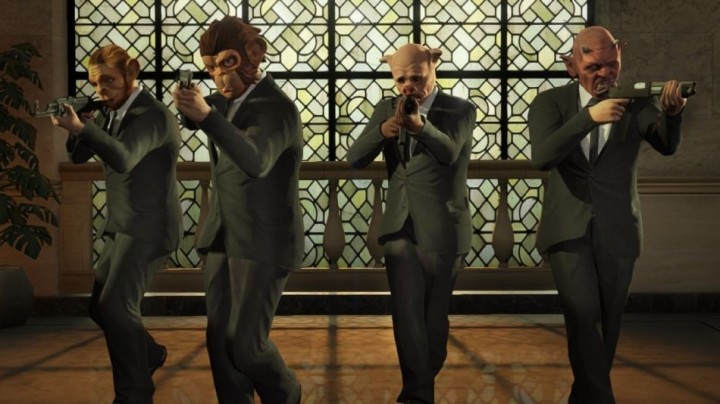 To be specific, I’m talking more about the game’s online component, Grand Theft Auto Online, than the single-player mode. I’ve barely touched the latter, instead spending nearly all of my time with the game on the former, something I never expected to happen. The main reason that GTAO has captured my attention to such a degree is that I’ve been playing it with a friend who bought the game soon after me, and although you can still play GTAO alone or in a session filled with random strangers, playing alongside a friend is an amazingly fun experience that never gets old, and this is what keeps bringing me back to the game again and again.

As I mentioned, GTAO was a bug-filled shambles when it originally launched, but that’s no longer the case (at least in terms of the PS4 version, I can’t speak for the other consoles) – in my several dozen hours of play-time to date, I’ve only encountered about a dozen or so minor glitches, which is an impressive achievement given the scope of the game. One problem I’ve encountered more than once is when after completing or quitting an activity with a friend, sometimes the game will randomly send you to separate sessions, meaning you have to then find each other again. This doesn’t happen often, though, and doesn’t take long to rectify.

Oddly, the only seemingly permanent glitch I’ve come across involves the golf activity: when playing a game of golf against my friend, our characters are often either floating above the ground or squatting like they’re about to personally fertilise the grass. Thankfully, this problem doesn’t affect the gameplay at all and at least it looks amusing. 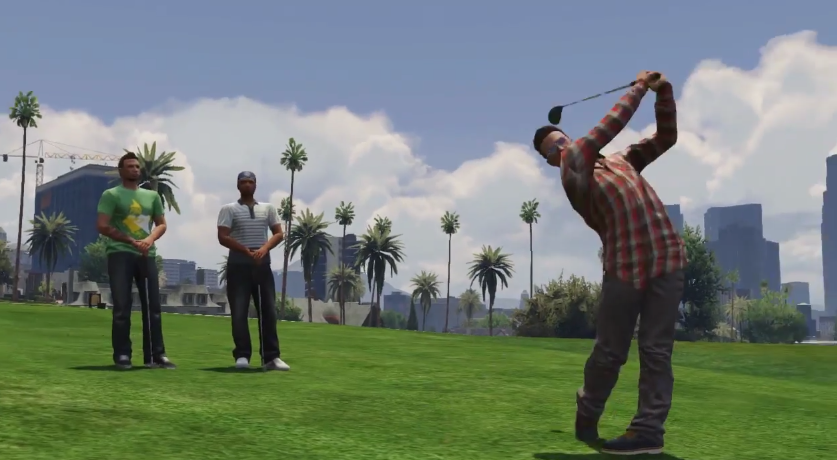 Also, it’s worth mentioning that the loading times can be noticeably long on occasion, although again, when taking into account the scope of the game, this is understandable and will only really be a detriment to the most unnecessarily impatient of players. (If you grew up in the 1980s like I did and endured the ridiculously long loading times that accompanied some home computer games back then, you can laugh in the face of modern loading times).

As for the in-game cash which can be purchased with real-world money, that option still exists and personally I still find the entire concept as grotesque as I always have, but at least in the case of GTAO, you really don’t need to pay for in-game cash to get ahead – you earn plenty of cash by just playing the game, and as long as you’re having fun while doing this then it never feels like a grind. And of course if you’re not having fun then just stop playing the game.

The basic structure of GTAO involves you playing as a silent criminal, one you bring to life via the game’s character-creator and who arrives in the state of San Andreas looking to make some money. As you complete jobs and engage in other activities, gaining money and experience points (the latter increasing your character’s level), you gradually unlock an increasing variety of jobs, activities, features and contacts, with several characters from the single-player mode making appearances as you climb the criminal ladder. 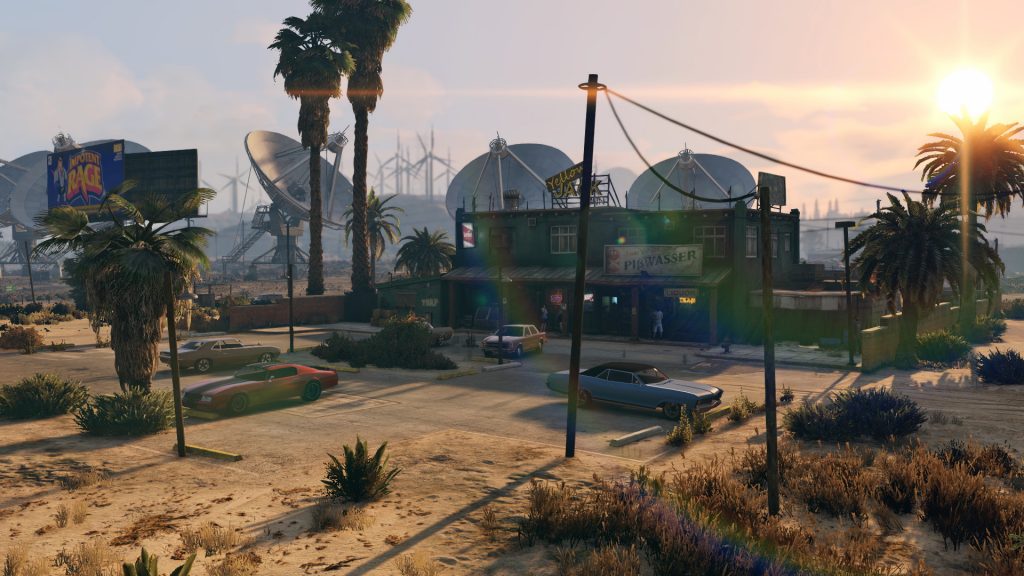 Predictably, diving into a public session – which can contain up to thirty players on the PS4 and Xbox One versions of the game – is a dangerous, chaotic and potentially frustrating affair, as most players you encounter seem to be interested in nothing more than killing everyone they come across and generally acting like idiots. Surprise, surprise. However, if you’d rather avoid getting repeatedly gunned down by loud, racist, sexist, pig-ignorant teenagers with usernames such as “xXx_DaN00bKillAH_xXx” and would prefer to explore some of the depth that GTAO can offer then thankfully the game offers you alternatives such as playing alone, with friends, with specifically invited players, or with fellow crew members if you belong to one of the Rockstar Social Club crews.

Rockstar’s commitment to offering the player choice in terms of how they play the game goes far beyond the above and it’s actually one of my favourite things about the experience. The vast amount of options given to you, from large to small, allow you to tailor your experience to how you like it, and this really puts across the impression that the developers were determined to make sure that the player could have fun, which is obviously to be commended.

As well as the numerous options on offer, GTAO also impresses in terms of its user-friendliness, such as how you can bank any cash you’re carrying through the banking feature on your in-game mobile phone, or how with the press of a button you can instantly stock up on ammunition before a job.

This user-friendliness extends to how I’ve personally been playing the game, which as I said is with a friend: you simply create a friends-only session, send an invitation and then off you go, it’s that easy. If you do become separated into different sessions at any point, you can send the other player or players an invitation to return, or even call and speak to them on your in-game phone and quickly get back together again. The game’s voice-chat system works really well and your character’s mouth even moves when you speak into your microphone. The lip-syncing is delayed enough that it ends up looking like a badly dubbed 1970s kung fu movie but it’s still a nice touch. 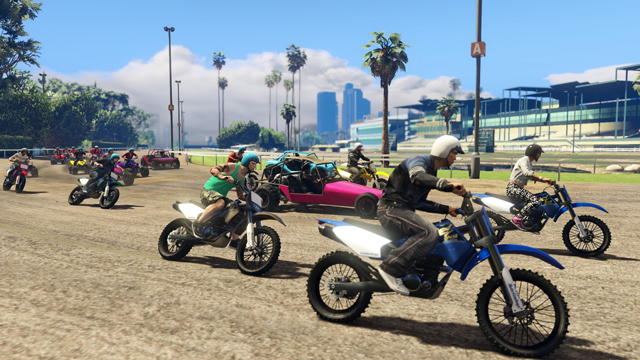 When in a session with other players you can engage in a number of different activities including sports such as tennis, golf and darts; races involving vehicles such as cars, bikes, boats, airplanes, and parachutes (some of the official, Rockstar-created races are fantastic); competitive match types such as sieges, chases and good old-fashioned deathmatches; and cooperative jobs such as repossessing cars, causing chaos to distract the police, stealing drugs, assassinations, and destroying vehicles. Some of the jobs can be very tough at lower levels – at least they can if you’re tackling them as one or two players, anyway – but they become much more manageable and fun once you’ve unlocked some better weapons. Also, some jobs can be approached in a number of different ways, adding replay value. This is a large boon as if you play the game long enough then you’ll more than likely end up repeating some of the jobs.

There is a vast array of guns and items of clothing to unlock as your character levels up, so there is plenty of scope for personalisation – as well as clothing, you can also choose from various hairstyles, tattoos and even your style of chest hair (I’m assuming this only applies to male characters). Personally, I recommend the “chestache”, which gives you chest hair in the shape of a large moustache. Very swish. There is also a range of purchasable garages and apartments to choose from, and there’s nothing quite like drinking a glass of whiskey while enjoying the stunning view through the glass walls of your high-end apartment. 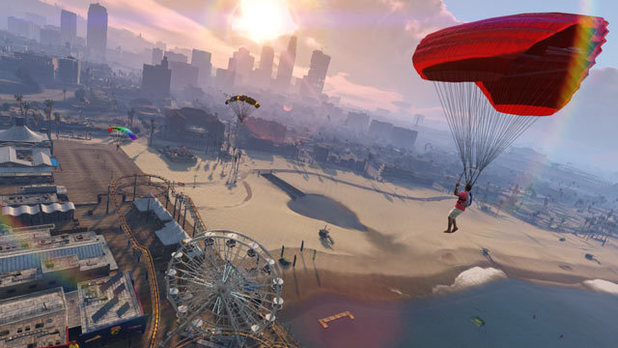 And of course, one of the key elements of the fun provided by Rockstar in GTAO is the element of freedom which allows you to make your own fun, whether you’re trying to land a helicopter on a moving train, robbing stores as a gunman and getaway driver, taking a photo of a friend as they leap off a tall building or crane, or rolling out of the driver’s seat of a speeding car while your unsuspecting friend remains in the passenger seat of the out-of-control vehicle (this amuses me far more than it probably should). And again, this sandbox approach is integral to why playing with a friend in GTAO can be more enjoyable than playing alone: if you’re getting up to entertaining shenanigans, whether impromptu or planned, then naturally the experience can be enhanced by the presence of a friend.

And there’s more. More activities such as the flight school challenges. More nice touches such as how if you die during a job but your friend or friends remain alive, you can choose from a number of camera filters and styles while watching the action; or how Rockstar temporarily introduced snowfall into the game-world at Christmas. More opportunities for the player to use their imagination with the ability to create and share their own missions (the quality of these varies wildly, of course, but it’s a worthwhile feature). And more polished, in-depth, Rockstar-created content in the form of the elaborate and ambitious heists which were added to the game in March of this year. 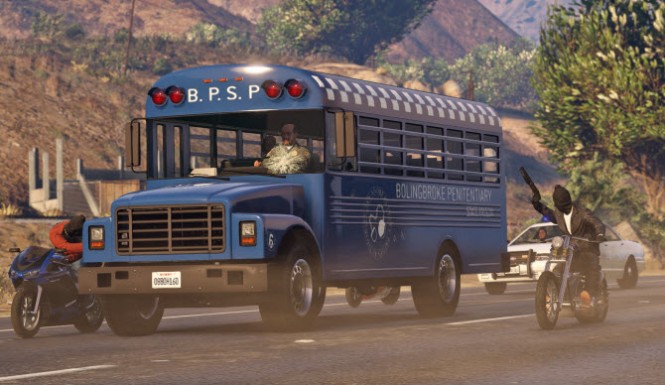 With their ongoing support of GTAO and GTAV in general – new content from the recently released PC version will apparently be coming to the PS4 and Xbox One versions later this year – Rockstar continue to treat GTAV as a game that they’re very proud of (which they should be) and for which their primary goal is for players to have fun. And for me, GTAO certainly accomplished this brilliantly and continues to do so every time I play it, via a combination of the entertainment directly provided by the game and the entertainment that my friend and I make ourselves.

While my PS4’s hard drive is already taking a hammering as I fill it with an increasing number of screenshots and video clips capturing amusing moments I’ve experienced in GTAO, no doubt my free space will only dwindle further as time passes and the game continues to provide such moments. It’s ironic that GTAO casts you as a criminal whose fundamental approach is to take from others in one way or another, as Grand Theft Auto Online itself is the game that keeps on giving. 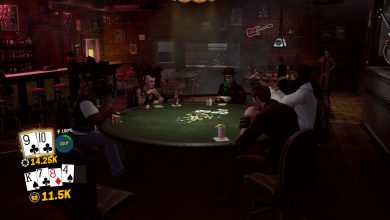 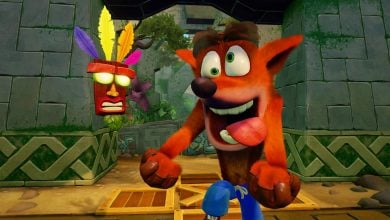 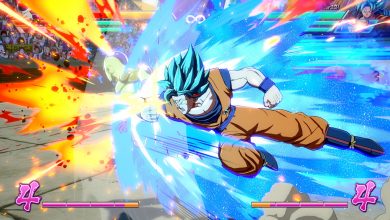