From Software’s Bloodborne can be a terrifying experience, especially if it’s your first time playing a game like this. Every step you take through the city of Yharnam drips with tension and fear as frenzied townsfolk bear down on you with pitchforks, and sinister beasts screech in the distance. Every new area you find just seems to bring its own horror, its own set of endemic beasts to hound your every move. You’re equipped, yes, but you just can’t seem to get a handle on the combat, and every time you die makes you more sure that you just can’t do this.

If this is close to your thought process, then you’re not alone. It’s been suggested that statistically, only a third of players will finish a game; sometimes this is due to time commitments, but in something like Bloodborne it’s completely understandable to feel overwhelmed if you’re unprepared. Luckily for you, us wizened old hunters have a list of tips and tricks for you which will help you navigate the crooked streets of old Yharnam town. Read on, but be careful, for knowledge is a dangerous thing. 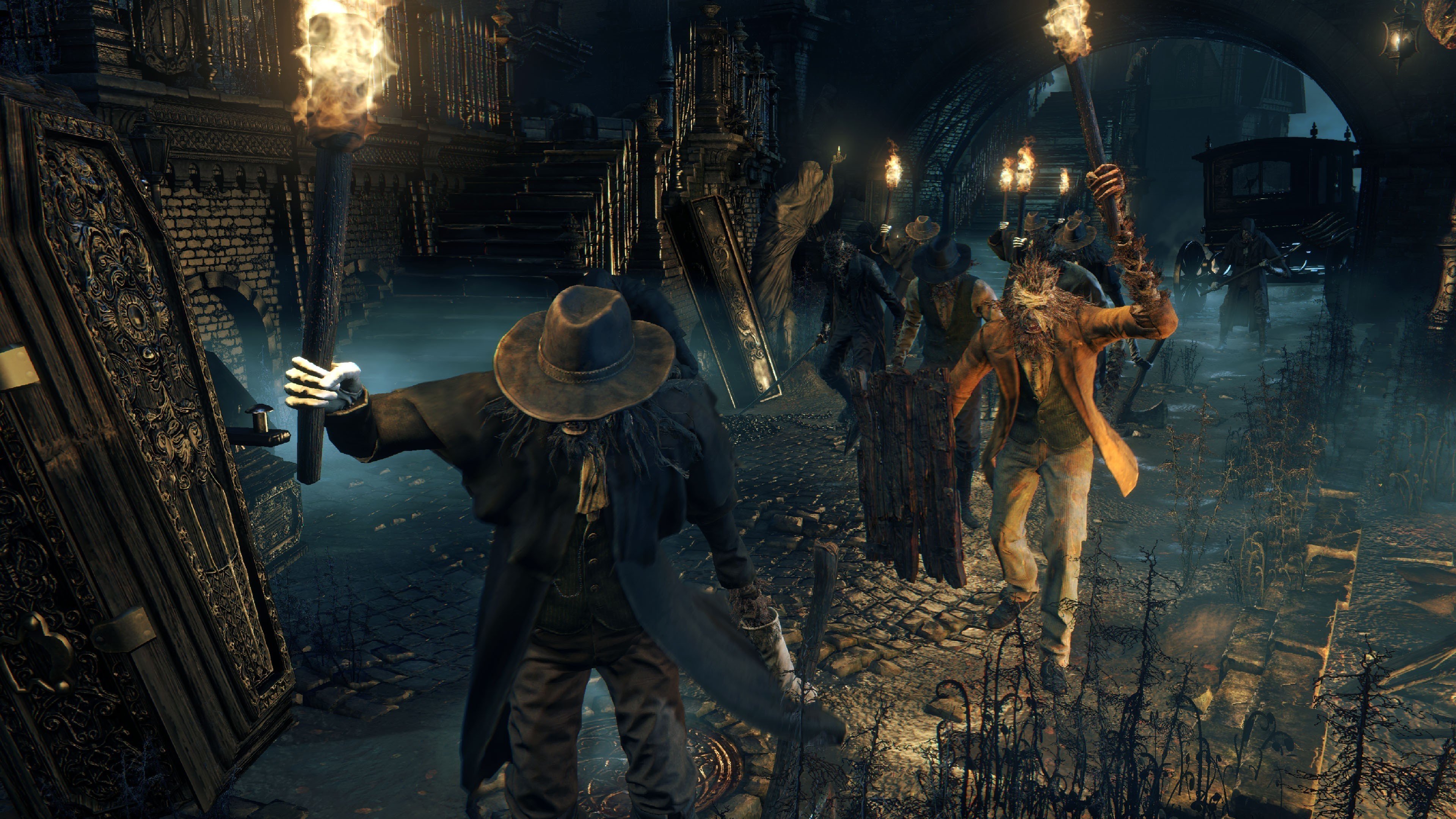 Pick the right weapon for you

At the start of the game, after you’ve died to the initial werewolf encounter in the clinic (you’re supposed to, don’t worry), you’ll be prompted to choose from three different weapons in the Hunter’s Dream: the Saw Cleaver, the Hunter Axe and the Threaded Cane. Both the Saw Cleaver and the Hunter Axe are weapons that “scale” with Strength, which means that as your Strength stat rises, you’ll do more damage with these weapons. The Threaded Cane, meanwhile, is a Skill weapon, so the higher the Skill stat is, the more damage you’ll do with it.

Just like every weapon in Bloodborne, these weapons all have secondary Trick forms which have different attack attributes. Whichever one you picked, you’ll be able to pick the others up later at a cost, so don’t worry too much. Spend some time in the Hunter’s Dream getting to know the heft and attack pattern of each weapon and you’ll be thankful when you’re in a pinch.

If you’re not confident that you can take a group of enemies, then there’s absolutely no shame in trying to avoid them. A great example would be the two werewolf monsters on the bridge leading to the Cleric Beast boss fight; these two werewolves are horrible to battle for a new player, so don’t be afraid to bait them away then run past them to find the shortcut beyond.

The executioner-style monster near to the large set of gates by the clinic is also a good example of fights which can be avoided. Unlike the werewolves, confronting this guy is entirely optional; he does yield some decent loot (sometimes), but you aren’t expected to be able to kill him yet, so don’t waste your time and emotion trying to overcome him if your skill level isn’t there yet. If you still feel a burning hatred towards him later, then you can come back and own him once you outlevel him. There’s no pressure.

This one seems obvious, we know, but it’s amazing how many players get tripped up by nerves and emotion while they play Bloodborne, and to a lesser extent the Souls series as a whole. Half of the reason Bloodborne is so difficult is its expertly designed atmosphere. Director Hidetaka Miyazaki has crafted a world so relentlessly oppressive that it feels as though every living thing is out to kill you.

To some extent, this is true; most of the beings in Yharnam are hostile towards you. If you stop between encounters, though, you’ll realise that there are many points in Bloodborne’s opening hours where you can take a breather and rest your beating heart before the next set of encounters begins. If you find your pulse rising, stop for a few moments and go get a drink or some food. Yharnam will still be there when you get back, but you’ll be more ready for it this time.

Get the parry move down

The parry move replaces shields in Bloodborne going from Dark Souls, and it’s an absolutely vital manoeuvre that will save your life if you can master it. Parrying is done by pressing the L2 button to fire your gun just as an enemy is about to reach the climax of their attack animation. If you’ve done it right, you’ll hear a sound effect, and the enemy you’ve shot will go prone for a visceral attack (press R1 or R2 when you’re next to them).

It’s no exaggeration to say that Bloodborne is an entirely different game if you don’t know how to parry. We’re ashamed to say that the first time one of us played through it, they didn’t understand how to parry at all, and so came away from the game with an entirely incorrect impression of its difficulty. Use the starting enemies near the first lamp to practice the parry move. You’ll be glad you did later on, when you really start to need it. Oh, and don’t worry about trying to parry Cleric Beast, but Father Gascoigne is basically a tutorial for the mechanic, so you’ll need it to take him down.

See? It’s not so tough. We hope these tips help you move past those nerve-wracking first few hours of Bloodborne. Once you gain mastery over the controls, you’ll see it’s really not that difficult. Go forth, newly blooded Hunter, and fear the old blood.