The Tropico series is an odd one. It’s been running since the first game launched for PC back in 2001 and has trundled along perfectly well ever since. These games aren’t massive hitters; they’re not in the same league as Sid Meier’s Civilization or Microsoft’s Age of Empires. Still, they attract a pretty solid fanbase and there’s clearly enough interest in the franchise continuing to warrant the consistent appearance of new instalments, despite the core concept being a fairly divisive one.

The latest game in the series, Tropico 6, came out for PC back in March this year. It hasn’t exactly had a troubled development, but it was originally slated for release in 2018 and was subsequently pushed back. Limbic is a fairly small studio, and making mechanics work for both consoles and PC is probably a pretty daunting task. Now, six months after its initial release, Tropico 6 arrives on our sunny shores. Will it stand up to the impressive legacy of its predecessors?

If you’re unfamiliar with the Tropico series, here’s a quick primer. You control El Presidente, the leader of the titular fictional island nation. Your task is to build up your nation, keeping your citizens happy while also making sure you’re skimming enough off the top to make a profit. Tropico has at its core a satirical bent; the political satire isn’t hugely subtle, but it is fairly effective as skewering dictators goes and has warranted more than a few chuckles from us here in the past.

Tropico 6 takes place across four eras: Colonial, World Wars, Cold War, and the modern era. As you might expect, each era offers up its own challenges for you to overcome as El Presidente. During the Cold War era, political relations between you and other nations will be frosty. The Modern era brings more technological advancements, but also more opportunities to lose money as a result. Tropico 6 is therefore a city management sim with a political edge. 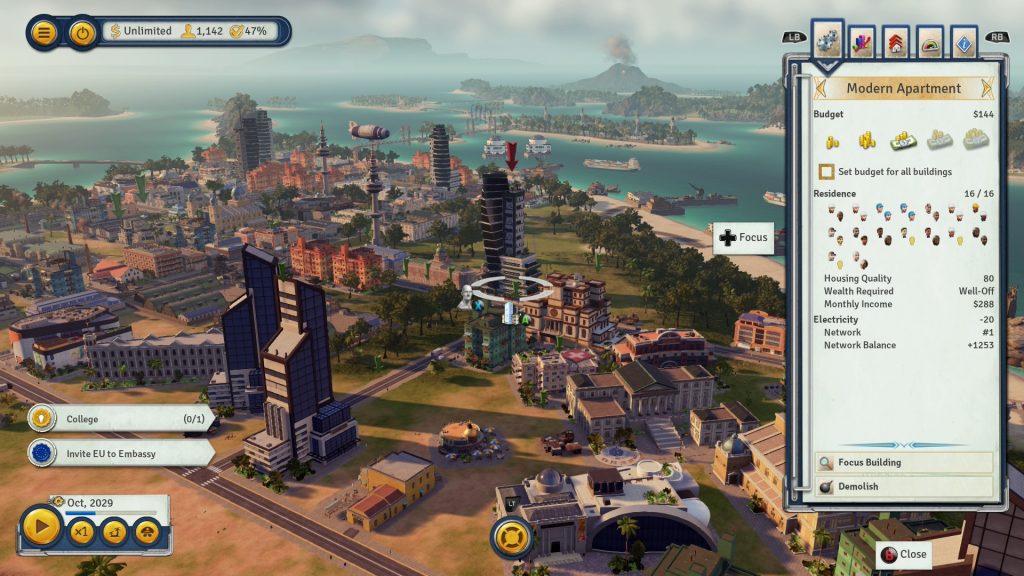 In the past, console versions of the Tropico series have looked a little shoddy. It’s a pleasure to report that this is absolutely not the case for the PlayStation 4 version of Tropico 6. We played the game on a PlayStation 4 Pro in 4K, and it looks absolutely stunning. Sunlight glistens off the glass facades of modern buildings, water positively shimmers, and palm trees sway gently in the breeze. This is the first console version of Tropico we’ve ever wanted to spend more time in than the PC version.

Of course, visuals aren’t everything, and unfortunately, Tropico 6 does falter a little when it comes to console controls. Real-time strategy games were never meant to be played on console; precision movement and the top-down perspective suggest that this is a game meant to be played with the finesse of a mouse and keyboard. The PS4 controller, while lovely enough in its own right, is a clunky and inexact way to control the action in Tropico 6. 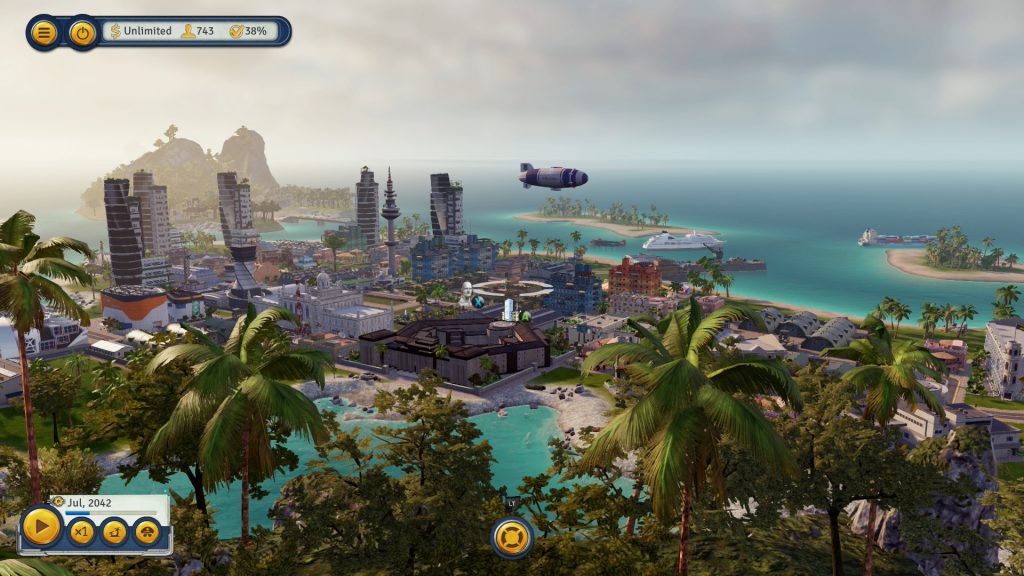 That’s a shame, because the strategy here is tighter and more focused than ever. Each era brings its own challenges and benefits, and you’ll have to make sure you’re balancing them more than ever before. The tutorials at the outset of the game do a great job of explaining Tropico 6’s mechanics without ever feeling overbearing. Past instalments have overtutorialised, which this one stays away from. It still won’t appeal if you just want to “get stuck in”, but it’s definitely been streamlined.

With that said, Tropico 6 does suffer from a similar problem to other games of its ilk. Initially, the breadth and depth of options available to you will seem overwhelming, but eventually you’ll realise that the core gameplay loop is the same: build new stuff, adjust sliders to keep staff and citizens happy, repeat. There isn’t much else to do here, and although the game does throw unique challenges your way, they never amount to much more than a momentary blip in the core experience. 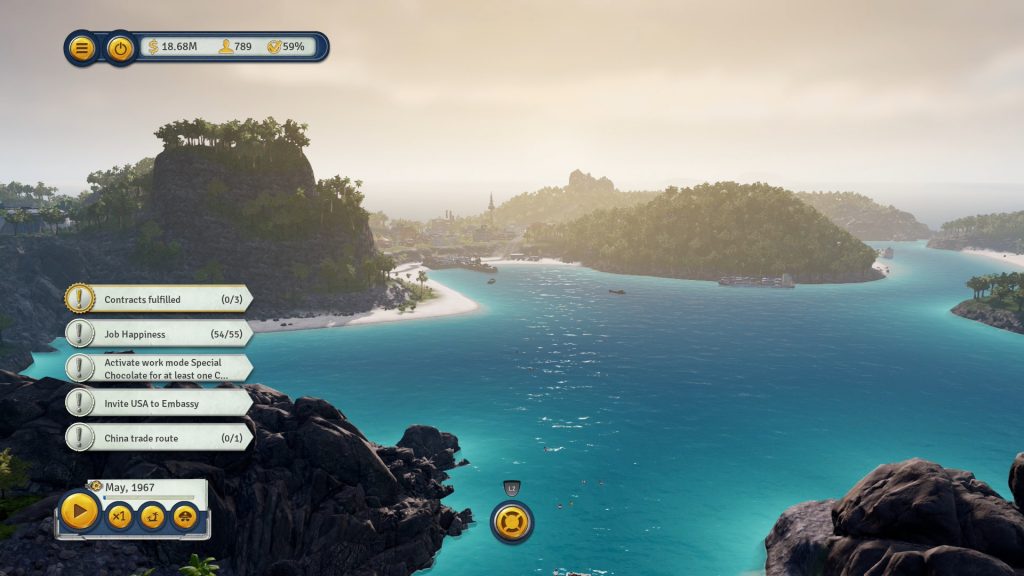 Tropico 6 also isn’t a particularly proactive game. If you’re familiar with the series up to this point and you’re a fan, then this may be a selling point for you, but there were long stretches of the game that we found fairly boring. The time you spend waiting for things to happen between decisions isn’t initially long, but each individual instance of this adds up, and it’s not long until the patience is tested. Again, this might be an appealing aspect of the game for you, so to each their own.

Whether or not you want Tropico 6 will depend on two things: whether you have a gaming PC and whether you have a tolerance for less hands-on gameplay. If you’ve got a PC, there’s simply no reason to buy the PS4 version over the PC version; it plays better even if it doesn’t look better. If you’re an action-minded kind of gamer who prefers to be shooting demons every second they’re not flying down zip-wires, then Tropico 6 definitely isn’t the game for you.

If, however, you’re the kind of person who likes slow, methodical strategy, and you don’t mind putting up with a little waiting and a few technical hitches, then Tropico 6 should be a foregone conclusion for you. The game on PS4 Pro is one of the most beautiful things we’ve seen this console generation, and it’s still an oceanic strategy experience with a huge amount of options, so if you’re a PS4 strategy buff then you owe it to yourself to get this. PC players can apply elsewhere. 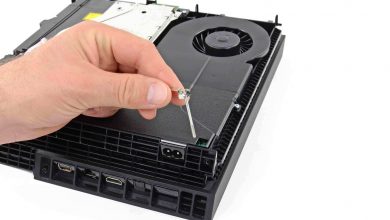