Literally many years have passed since every game developer on the planet decided to make World War II video games, the media spearheaded this frenzy and soon followed many franchises that dealt with slaughtering Nazi regimes. There is only one thing that could improve this game genre… add Nazi zombies into the mix.

World War II is a substantial part of history and most of us have played at least one war game, but forget Wolfenstein or The New Order and let’s focus on tips for Zombie Army Trilogy. (Same people as makers of the Sniper Elite Series)

Zombie Army Trilogy is a 3rd person shoot-em-up that begins in 1945. (you guessed it!) In a last ditch effort to beat the Allies, Hitler unleashes an army of undead zombie soldiers across Europe and your task is to kill the horde over several expansive locations and put an end to the Nazi leader.

For those familiar with Gears of War or Sniper Elite, the game will feel rather familiar to you. Read on to check our tips and help you get acquainted with Zombie Army Trilogy.

Conserve your ammo with melee attacks

Ammo is not too hard to find in this game but the Safe Rooms are few and far between. Keep this in mind before you go trigger happy on easy targets. A swift kick with L1/LB can kill skeletons and kill zombies in 2 kicks, the first kick sends them to the ground then you can boot their head off!

Headshots for the win

You will not be able to kill zombies by blowing off their arms or legs, shooting them in half does not even kill some of the creatures in the game, they can also re spawn if you don’t blow off their heads. Master the headshot and victory will be yours for the taking.

You can use the Lee Enfield Mk. III, the SVT 40 or M1 Carbine, press and hold the trigger to bring up the scope and then hold R1/RB as to slow down the breathing pace of your character, this will make your targets easier to hit.

When headshots are made like this, the game often treats you to a mini cinematic slow motion kill.

Tip- for a quick way to access the pistol, hold the triangle or Y buttons to equip yourself with the Colt M1911, Tokarev TT 33 or Luger P08.

Tip- reload whenever you can! Use square or X button to swap your magazines quickly. Avoid death with a little quick thinking!

Don’t throw your weight, use a grenade!

If and when you encounter a large number of enemies onscreen. (This happens a lot in this game!) As it happens, you will not always have loads of ammo to kill all of the blood-lusting horde at once. Use the Stielhandgranates to clear the way, throw the grenade in the direction of your foes, press R1/RB to throw it and make sure you are out of harm’s way! 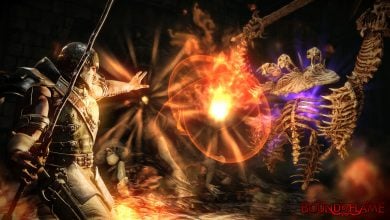